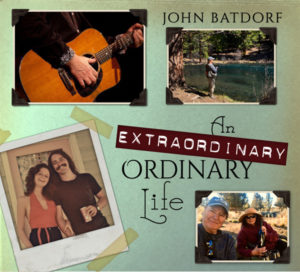 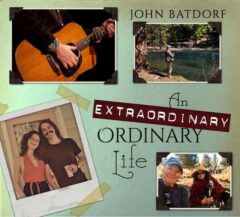 John Batdorf’s latest is a six-song EP, An Extraordinary Ordinary Life. The pop/soft-rock specialist is certainly prolific in his recorded output—this follows on the heels of his previous 2020 release, Last Summer. Whether solo or teamed with other artists like James Lee Stanley and Michael McLean, he has established himself as a known quantity whose songs are slickly produced, upbeat, and catchy. This time, Batdorf is not only observing 50 years since his recording debut, but also doing so in the midst of the Covid pandemic; the LA resident saw four extended family members come down with the virus (and thankfully recover.) His songwriting partner McLean had a serious heart disorder as well, but has also been doing better. But with all of this going on, the focus stays, like most his songs, positive.

From first listen, it is apparent that another thing that hasn’t changed is Batdorf’s craft, tunes that are self-produced and played, while underneath the light-weight charm these songs are the work of a consummate pro who has been a part of the LA studio scene since 1967 as a performer, songwriter for himself and other artists, working as a session vocalist, and writing and singing music appearing on scores for TV shows.

“I Wanna Know” opens, driven by acoustic guitar and throngs of backing vocals. It is the perfect shimmering, single-length example of his writing, as a mid-tempo tune that expresses his heartfelt feelings for a lover with his friendly upper register vocal leading the way. The title song follows, and he is asking if the listener has noticed the tendency in this day and age to let the wonders of everyday life slide by unnoticed, “Have you seen the light just fading/ Have you felt some despair?” His lyrics are clear that we need to make room in our lives for beauty.

A country approach is followed on “Tone Deaf and Two Left Feet,” as he paints the picture of a couple who perform, badly, with Jeremy playing guitar and Jessie dancing. Fiddle and close harmonies stand out behind lyrics about a pair in love and oblivious to the rest of the world. The slower ballad “Why Don’t You Move Home” is sung in ¾ time, as two lovers whose relationship is on the rocks are exchanging letters, expressing that hope remains for forgiveness and renewal.

“She’s So Lonely” picks things up, as Batdorf is singing about a woman who is “not lonely enough to be with me.” The song is presented from the viewpoint of the forlorn former lover, feeling slighted because he is “the answer to a prayer that she’s never prayed.” The morose mood only lasts until “Choose to Receive,” which wraps up the set. It relates blissfully his embrace of the way things are, and how he can “feel the sunshine in my soul.” It is an upbeat sentiment, especially in the wake of the preternatural angst of the last year, and layered guitars and backing vocals are joined by keyboard strings to give it some extra oomph. A fitting conclusion to John Batdorf’s newest collection.